Admittedly I didn’t know much about Chicago’s Locrian when Drenched Lands arrived at my doorstep a few months back, but the darkly seducing sounds swept me away within seconds, or at least minutes. It starts slowly with desolate, grainy guitarscapes that moves into a drone that sounds like tumbleweed on its way to burst into fire at any given second. There’s so much energy packed within every segment that it makes me afraid that the involved won’t be able to stay away from the noise crescendo for much longer. But they stick to the tortured power drone for as long as it’s needed. We get shards of feedback from the wastelands and endless loops that seem to be conjured from dark wells, twisting around its own axis in the infinite darkness before briefly rediscovering the white light.

It’s been long since I heard anyone describing alienation in society with the same unrelenting force, but at the same time displaying so much emotion. Most tracks definitely nods in the noise/drone direction while others maintain the magically resonating damaged soundscapery but at the same time pirouettes into something a whole lot more organic. Sure, this is experimental and primitive in its nature but the feedback squalls are presented in such an atmospheric, melodic and even melancholic way that it despite its heavy origins strikes me as very emotional. Drenched Lands is a true masterpiece that manages to sound surprisingly original and it will for sure be on my top ten list when it’s time to wrap up the year.
# posted by Mats @ 12:49 PM
| 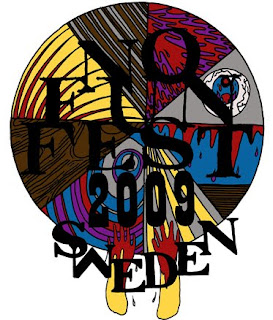 No Fun Fest
No Fun Fest in Stockholm is going to be a blast. Sadly, I’ll only be there fo the saturday shows but what a line-up!

What could be a better way to celebrate the return of the Broken Face blog than to take a deep plunge into the Last Visible Dog pool? It’s kind of strange that this well-established underground label is the same label that I started following about ten years ago, then operating on a very tiny scale out of Lincoln, Nebraska. After some years in Providence Chris Moon has decided to abandon the East Coast in favor of Valley Village, California. Given this bunch of relatively new recordings that’s not going to change the direction of the label in any considerable way as all of the items described below very much lives up to the LVD standard.

First out is a brand new album from Broken Face heroes in the Renderers out of New Zealand. Well, they have actually been staying in for a while Germany but I think Monsters and Miasmas (LVD) was recorded down under. To a high extent this is what we’ve come to expect from the Crook family: jagged squalling jams, hypnotic reverberations and forlorn folk tales that project introspective images of tormented souls onto a decayed canvas of mythical proportions. If you ask me it’s another stunner and it might even be my first choice after the essential Dream of the Sea album. I admit that’s one of my all-time favorite albums and that I am a fan boy when it comes to these fellows but don’t you think it’s about time that they get some of the attention they deserve?

Brian Crook is besides his duties in the Renderers also an integral member of long-lasting The Terminals and although I am a happy owner of the original ’95 recording Little Things I am the first to celebrate a proper reissue. Freaked out guitar buzz morphs with thick lava fields of synth sounds and on top we find driving drums and Stephen Cogle’s unmistakable voice; somehow dramatic, mystical and in your face at the same time. It’s as much punk rock as it is pop but depending on whom you ask I am sure goth and NZ noise are genres as likely to be mentioned. But most of all it’s simply the Terminals. No one has ever sounded quite like this and to tell you the truth I don’t think any band every will.

Saxophonist Valerio Cosi and percussionist Enzo Franchini’s Conference of the Aquarians is another stellar disc, but this one nods distinctively in the direction of free jazz. Well, actually free music is probably a better term as this one effectively avoids the trap of predictable avant-gardism. Cosi sure knows how to blow the horn but the noise is not just there for its own sake, rather as an important element of something a whole lot more grand. After a track of wailing horn noise and frenetic drumming we get careful drum patterns that move across a plane of oceanic horn sections that tell just about everything you need to know about longing and sorrow. Add to all this the addition of sitar, electronics, guitar and you get yourself a record that stands on its own feet without any obvious comparisons.

Kristallivirta is the result of a nearly accidental meeting when Aan met up with Eyes Like Saucers on the latter’s European tour. We have seen these fellows in outer margin bands like Kulkija, Uton and Eyes Like Saucers before, but I don’t think I have heard anything from any of them that have gone this far out of the way of the regular route to create something this otherworldly. Slow-moving clouds of harmonium bliss meanders around repetitive percussion and esoteric effects to stunning meditative effect. This is definitely not for those with short attention spans but fans of Uton and Angus Maclise stuck in some kind of nocturnal haze will probably adore this as much as I do.